This excellent article in Salon : makes two very important observations everyone, but especially women and doctors need to pay attention to:

— Not all sexual dysfunction in women is psychologically based . I know from 36 years of clinical experiences that women who say that they aren’t interested in sex may be experiencing pain during sex and therefore, due to embarrassment or discouragement, may simply want to avoid it. There are a number of physical conditions that do not stem from either anxiety or depression or simply the lack of lubrication. If your doctor isn’t mentioning other possible causes of difficulty, you need to speak up and ask.

— There are effective “off label” treatments for most physically based sexual disorders, however, since the FDA has not approved any of them specifically for female sexual dysfunction, insurance companies will not pay for them.  This leaves the patients (who were courageous enough to talk openly about their issues and who were fortunate enough to have gynecologists who are smart enough to know how to treat the problem) in the lurch and having to pay for their treatment out of pocket.

While part of the problem stems from simple cultural  prejudice and sexism ( consider how many medications there are FDA approved for men’s erectile dysfunction) there are three other pieces to the puzzle:

1) The lack of adequate patient information about the physical causes of female sexual dysfunction.

2) Embarrassment and attitudes about sex sexual disorders which inhibit which many women and even some doctors from talking about such issues.

3) Discriminatory policies by the regulatory agencies like the FDA which in effect prevents many women from getting adequate treatment by refusing to approve effective medications for such problems which, in turn, keeps insurance companies from paying for them.

“Good sex” as Dr. Ruth used to say is an entitlement for all healthy couples.  Unfortunately, many are kept from this basic joy in life because some they can’t pay for the treatment of sexual problems. Others suffer needlessly because they are too uncomfortable or too embarrassed to bring sexual problems up when talking to their doctors.  Worst of all, some doctors are negligent because they don’t adequately probe all possible causes of the patient’s sexual disorders and assume that the problem is always psychological.

Fortunately, with our effort, these problems can all be fixed. We must not stop, however, until seeking help for sexual problems, which are medical in nature needs to be as easy as going to the doctor for a broken arm any other reason. 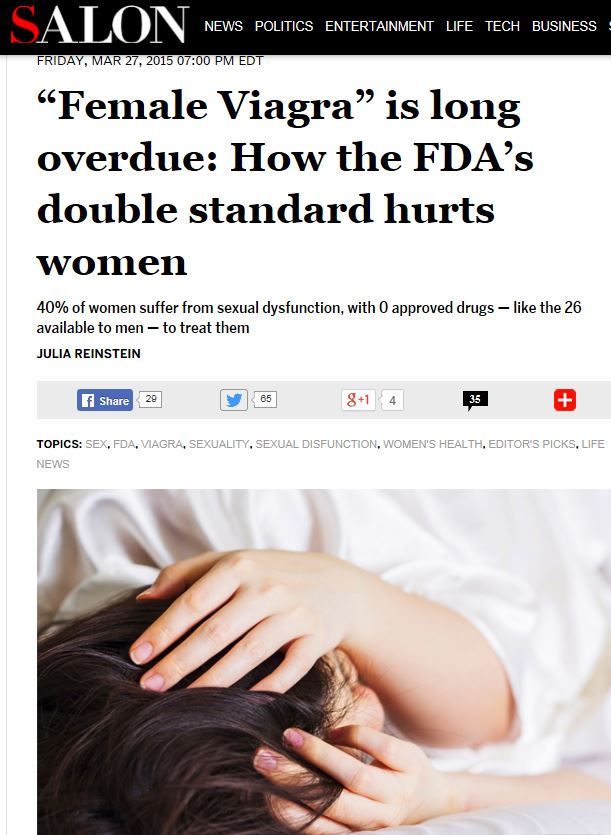