Understainding our False Guilt about Sex

Did You Know:   that most guilt about sex is “false” guilt? 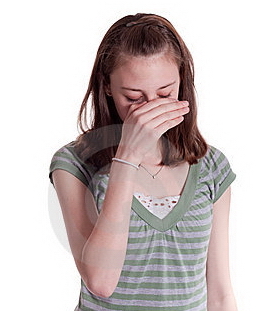 Sex and False Guilt
Everyone knows what guilt is: that self-conscious feeling of shame and embarrassment.  While there are legitimate reasons for feeling guilty (like when you harm someone or break a promise or vow), many experience false guilt which is an externally imposed sense that you did something wrong, even though you didn’t.
–Most false guilt comes from the fact that many people have an unrealistic and idealized sense of what is normal or right.  Many times these myths are passed down from generation to generation through families, religion, and the media.  As a result, a person’s sense of what s/he ought to be or feel or do and who s/he actually doesn’t match and therein lies the problem.  Instead of examining their expectations,  many folks automatically blame themselves and feel that they are inferior or inadequate or weird.
–This negative self-image is especially common when it comes to sex.  Whether through harsh religious teaching or other repressive cultural forces, many have grown up thinking that normal aspects of human sexuality are sinful or nasty or dirty. This unfortunate conflict between what is natural and what is moral or right can create not only problems with anxiety but can also harm the development of a healthy self-image.  –Tragically, in cases of child abuse, victims often believes that they have done something wrong or that something about them is perverted.  Ironically, intense guilt can push a person to act in ways which can actually become problematic. (If you’re old enough, think of Philip Roth’s “Portnoy’s Complaint”, for younger folks think of Mad Men’s, Don Draper.)
–The fact is being curious about sex is normal and so are the sexual feelings of attraction and arousal which come from looking at the human body.  Likewise, while some religious beliefs condemn masturbation, medically speaking it is not only harmless but a good way to relieve muscular tension and emotional anxiety.
A sense of not being normal can be a problem in so many ways in life. It is like a dirty little secret that you carry around but you don’t want anyone else to know.  People can have such an intense sense that something is incurably wrong with them that they avoid seeking professional help or even talking about it.
— Inappropriate behavior, that is actions which create legal, social or medical problems is something to be concerned about. Guilt feelings which are not connected to problematic behavior are the ones to take a look at.
— Life is difficult and having the extra burdens of unnecessary guilt can make it even harder.  If you are troubled by a nagging sense of shame, you may want to reality test what your standard of normal is.  If you have questions, you might want to think about talking with a therapist. It is a wonderful thing to learn that what you thought was wrong isn’t and that you are really normal after all!