When Expectations Don’t Work Out. 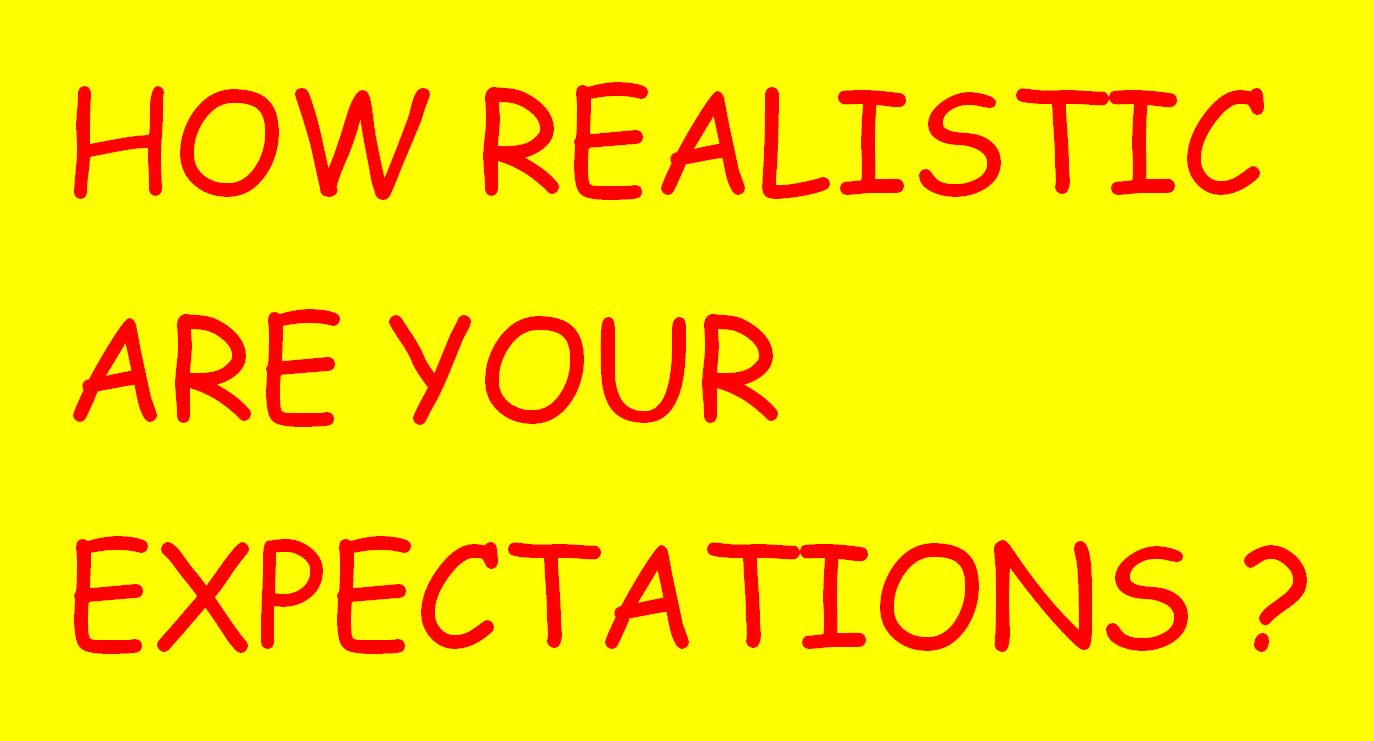 Expectations. We all have them, that is to say we all have a sense of what is going to happen in our lives. We have routines which we follow and much of our life is predictable. The sun rises in the morning and sets in the evening and so forth. Part of life, however, is unpredictable and folks who naively or uncritically assume outcomes without sufficient reason can be shocked and sadly disappointed.

Indeed, unrealistic expectations or expectations that are not met are a major source of distress in life. The spectrum of disappointment is wide and ranges from trivial things like a sports team losing a game or running into a long line at the bank all the way to a life-crisis event like losing a job or being told that one has a serious disease.

There are lots of events in the middle, however, which, while not serious with a capital S, nonetheless, create inconvenience or worse. Being caught off guard by these kinds of life events is not only frustrating but a situation which can trigger an anger reaction which, in turn, causes us to act out in ways that are socially disruptive and unpleasant for everyone involved. Indeed, being shocked by unexpected happenings is one of the biggest causes of unpleasant outbursts of anger.

When a person encounters a reality that is really different and frustrating to what was expected, there is an occasion for panic and anger. The shock and trauma of the disappointed expectation can temporarily disconnect the person from their neo-cortex (the part of the brain which is rational and can think) leaving the him or her to cope only with the animal remnants of his/her limbic system and amygdale. In stead of responding intelligently, a limbic reaction consists of either fearful withdrawal or aggressive anger which can be very unpleasant for everyone who is within earshot. The degree of intensity which the anger expression takes ranges from discouraged sighs on the lowest end to violent behavior on the extreme end.

In general, those who understand and accept the fact that much of life does not always go as planned, are better able to avoid disconnecting from their cortex and cope with and adjust to unexpected but needed changes. For the most part , persons who have the greatest difficulty coping rationally with surprising changes are folks who over-estimate their ability to influence and control what happens in their lives. Neurologically, these are often folks who have experienced significant shocks in their young lives which has lowered the threshold for blowing their cortical circuitry and leaving them at the mercy of their amygdala.

Today, we are going to look at how to 1) recognize amygdala based reactions which often result from unrealistic or unmet expectations, how to 2) calm and reality-test panicked perceptions which generates anger outbursts and ) how to 3) problem-solve your way to more rational responses to negative and unexpected life events.

While it is simply the nature of life to present us with surprises and challenges which are beyond our control , e.g. things like flight cancelations , illness or auto mobile breakdowns, many frustrating experiences can be eliminated by being more careful about the process of knowing what we know and the expectations we have.

Given this human frailty, and especially for those who find it difficult to contain temper outbursts, it is important for individuals to carefully examine how realistic their expectations are regarding various situations and how they know what they know and how they arrive at their images of what is going to happen. Frankly , not only in business but in interpersonal interactions, many of us are lax about really checking out the details of agreements or plans we have with others.
Here are some important tips to remember when reality testing your expectations:
1) Be more Aware. Examine your assumptions. Don’t take your expectations for granted .Ask how you know what you expect. For example, especially in interpersonal communications, double-check and ask yourself did I misunderstand ? Likewise, remember that people are imperfect and life is unpredictable.
2) Recognize when you are struggling to accepting the reality of an unplanned occurrence. Struggling is a sign of panic and cortical disconnect. So much of angry expressions are based on a fundamental refusal to accept that something frustrating has happened. Ask yourself , will getting or abusive really change anything ?
3) Learn to calm and self soothe the panic. Temporarily withdrawing from the situation and employing some intentional breathing exercises will reduce the presence of stress hormones and reestablishes a connection with your cortex. Self-questioning and reality-testing allows one to perceive things more accurately and have a more realistic assessment of the actual harm that has been created by the disappointment. This more congruent assessment will help one to feel calmer and muffle initial reactions of outrage. Realizing that not everything is ruined is a good sign that the connection to the cortex has been re-established .
4) Problem-solve with a Plan B.. Think about what other options are available With an workable Plan B in mind, one which accepts the changes which must be made and one can transform an initially hostile reaction into a more civilized response.
5) Practice. Learning to control anger in the wake of negative surprises is difficult but, with time and practice, one can get better at both shortening the time to recover rationality and reducing the intensity of one’s initial shock reaction.

Unexpected changes can be an inconvenience and a pain but, most of the time, the real or lasting damage to our lives is minimal. With a little practice, we can learn to recognize when an unanticipated change that gets us into a panic response.

Likewise, we can learn to calm the panic and regain the ability to think rationally. This process dramatically reduces the intensity of our hostile first-reactions to the unexpected events that didn’t go our way. While being caught off guard may feel at first like a serious threat, calm reflection can reveal that it is not such a big deal. Being able to control one’s temper in the wake of unforeseen inconveniences is a skill which will pay many dividends throughout one’s life.